Normally, our Ideation Center is where we help financial institutions create a plan for a “branch-of-the-future” transformation. But recently, it took on a new role as the site of a kids' bike build-a-thon, with a DBSI twist: from start to finish, the process mirrored DBSI’s design-build customer-centric approach.

The end goal was creating custom-built bikes to donate to the Chandler Boys & Girls Club. Employees were teamed up in a competition to assemble the bikes while dealing with real-world problems such as supply shortages, budget constraints, staffing challenges, and quality inspections — building the bikes to meet custom specifications and on budget. 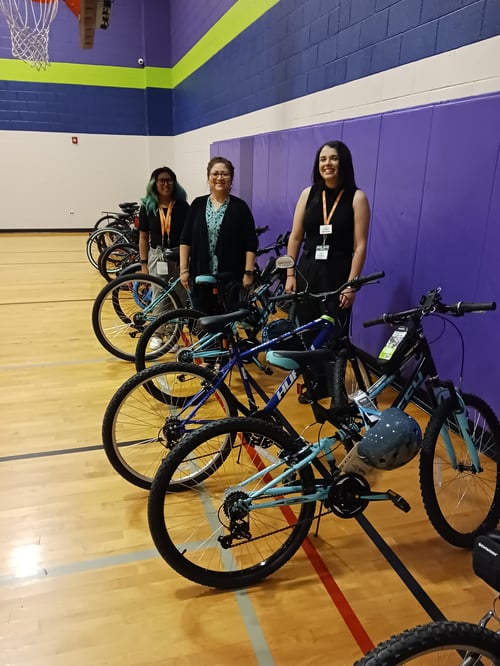 “We enjoy this event every year because it serves two purposes for us. First, there’s no better feeling than knowing we’re helping local kids have a better holiday with a new bike,” said Ginny Bruni, Chief Operating Officer.

“Second, it gets our employees involved in a fun effort that mirrors our business processes. The bike build teams are provided with specific profiles to design to. That’s our specialty. We take a great deal of time understanding customers' needs and their uniqueness, the space they will occupy, and the experience they will deliver to their clients, and create a customized environment to help them execute on that.” 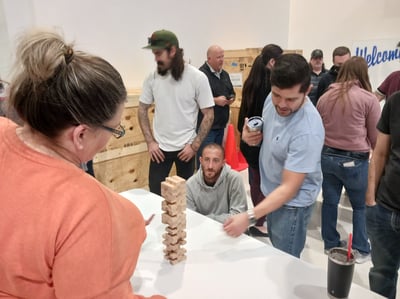 In the first phase of the event, DBSI directors assembled their teams and got them warmed up with a Jenga-themed icebreaker: the more Jenga tiles pulled, the more icebreaker questions they had to answer – which earned teams “bike bucks” to use toward their building projects.

Next up: purchasing the bikes and accessories. After reviewing specific bike profiles, teams were tasked with purchasing the parts needed and beginning assembly. By design, the accessories were limited in quantity, and competition was fierce. Wheeling and dealing became commonplace as teams began bartering, bargaining and in some cases, begging for the parts needed to make their bikes extra special. 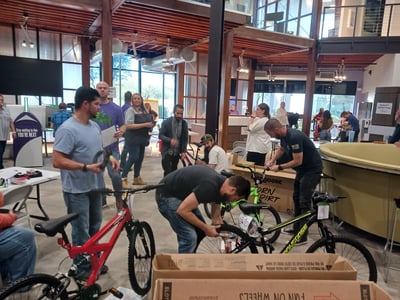 A health monitor ensured team members all were healthy and able to perform. Anyone with “symptoms” was assigned to sick bay — leaving their teams to deal with staff shortages. (Good news, though, the teams could add the sick pay to their budget, giving them extra funds to cushion their cash flow.)

Once the bikes were completely assembled, a quality inspection was in order. Some failed and were se 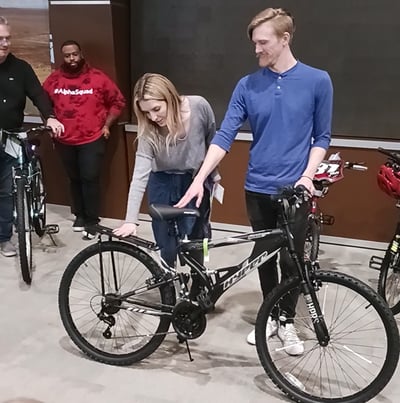 nt back to assembly for rework.

Bikes that passed quality inspection in the first review were rewarded with bike bucks to promote minimal rework.

Next, the teams presented the bikes, their process and customization features to a Shark Tank-style panel of judges. Matching product features to client expectation was key. To emphasize the importance of profitability, the team with the most “bike bucks” left in their budget won the competition.

“The best part of this is that we’re making a kid happy with a new bike at Christmas,” said Brock Elkins, DBSI Senior Graphic Designer. “The whole process is really fun, collaborating with coworkers in a different way than we normally do and being competitive in a fun atmosphere.”

All told, some 60 DBSI employees together assembled 21 bikes in about 3 hours.

With the bikes quality-checked and approved, they could then be transported. DBSI employees Corde Kurtz, Kevin Stewart and Tommy Mendez loaded up their trucks and headed to the Chandler Boys & Girls Club to present the 21 bikes to the staff. The Boys & Girls Club will partner with Santa to ensure that the bikes make their way to the kids who had them on their wish list.

← Crafted with Care: GingerBranch Winners too Sweet to Eat