DBSI Design Team Struts its Creative Talents on the Runway

DBSI’s Design Team is used to creating amazing interiors for banks and credit unions, but their creativity was recently put to the test for Couture 2016—a contest blending interior design and fashion.

The teams were tasked with creating a runway-ready look using materials from interior design manufacturers, and DBSI was paired with Lumicor architectural panels and Mohawk Group carpet. 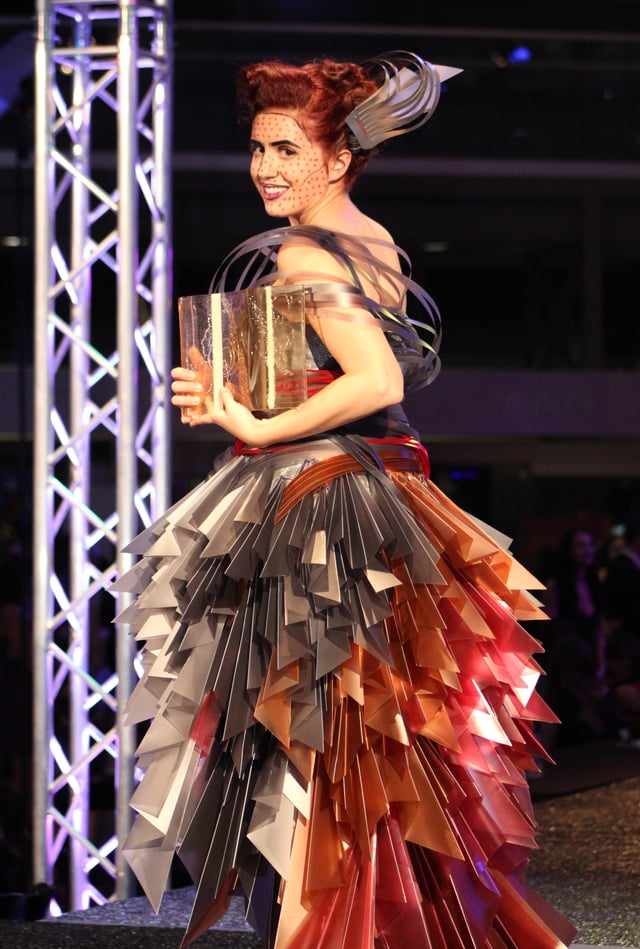 The team used deconstructed elements of the two materials—carpet-backing and translucent resin sheets—to create their dress, cutting and folding about 400 pieces of the resin sheeting for the art-deco inspired skirt.

Their design took cues from the 1930s and ‘40s for the contest’s “Decades of Inspiration” theme, with the shifting colors in the dress represent the transition from WW2 to the Post-War era, said Walsworth.

DBSI Interior Designer Samantha Di Cola helped create the dress and modeled it on the runway with hair and makeup inspired by the comic books of the times.

They credit teamwork, high standards, a clear vision and execution as part of their winning strategy.

“It crosses over into what I do as a designer every day,” said Salas.

That’s because DBSI is a company where employees and clients can stretch their creativity and explore new design ideas, said Walsworth.

The team's win was well deserved for the hard work and focus they put into producing great design, said DBSI’s Director of Design, B.A. Eastwood.

"I am so proud of the Design team that participated in this event. Design is their passion, it’s in their blood, whether it be interior design, architecture, or fashion."